In 1997, a hemp rope dating back to 26,900 BC was found in Czechoslovakia, making it the oldest known object to be associated with cannabis.  Since that time, hemp has played an important role in humanity’s development.  For thousands of years marijuana was not only legal, but an important crop among cultures throughout history, and held commercial, medicinal, and spiritual value. [KILDE] 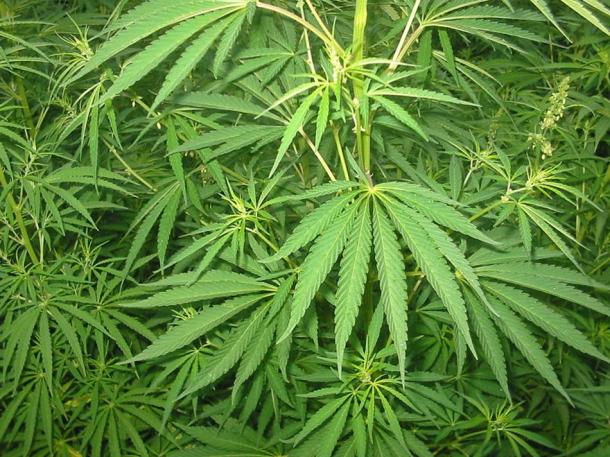 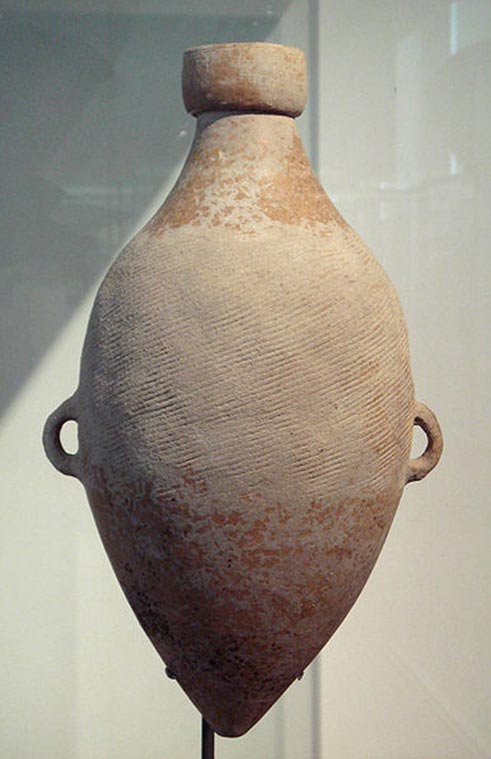 The cultivation of cannabis, commonly known as marijuana, can be traced back at least 12,000 years, which places the plant among humanity’s oldest cultivated crops.  Cannabis plants are believed to have evolved in Central Asia in the regions of Mongolia and southern Siberia.  The earliest cultural evidence of Cannabis comes from the oldest known Neolithic culture in China, the Yangshao, who appeared along the Yellow River valley.  From 5,000 to 3,000 B.C the economy of the Yangshao was cannabis-driven.  Archaeological evidence shows they wore hemp clothing, wove hemp, and produced hemp pottery.

The first recorded use of marijuana as a medicinal drug occurred in 2737 BC by the Chinese emperor Shen Nung.  He documented the drug’s effectiveness in treating the pains of rheumatism and gout.  Both hemp and psychoactive marijuana were widely used in ancient China.  The ancient Chinese used virtually every part of the Cannabis plant: the root for medicine; the stem for textiles, rope and paper making; the leaves and flowers for intoxication and medicine; and the seeds for food and oil.  Cannabis seeds were also one of the grains of early China and ancient tombs of China had sacrificial vessels filled with hemp for the afterlife.

The first medical journals in China were made of hemp and eventually it came to replace papyrus as the source of paper that eventually fostered the spread of written knowledge.  It was used to record the deeds of history, eventually replacing clay tablets and expensive silk to be read by everyone. 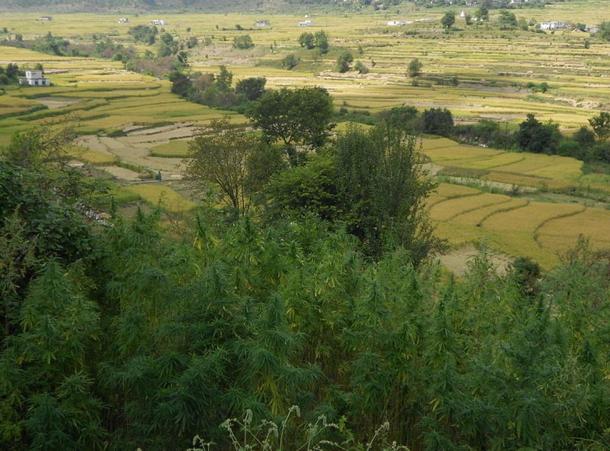 From China, coastal farmers took marijuana to Korea around 2000 B.C. or earlier.  It reached India between 2000 B.C. and 1000 B.C., when the region was invaded by the Aryans, a group that spoke an archaic Indo-European language.  They called cannabis “bhang.”  In India, the Aryan religion grew through oral tradition and was recorded in the four Vedas, or books of knowledge compiled between 1400 and 1000 B.C.  They worshipped the spirits of plants and animals, and marijuana played an active role in their rituals.  Like the Chinese, the people of India have a long history of using hemp in their clothing and medicine.

Cannabis use in ancient Egypt has been recorded as far back as 2,000 B.C., found on scrolls depicting medicinal plants.  It was first documented in Kemet (ancient Egypt) to treat sore eyes and cataracts.  According to Diodorus Siculus, a Sicilian Greek historian, Egyptian women used cannabis as a medication to relieve sorrow and bad humor.

In 1213 B.C. Cannabis pollen was found on the mummy of Rameses II.  Additional research has linked cannabis pollen to all known royal mummies.

Marijuana was introduced to the Middle East between 2000 B.C. and 1400 B.C., where it was probably used by the Scythians, a nomadic Indo-European group.  The medical use of the plant in the middle east is recorded in 700 B.C. in the Venidad, an ancient Persian religious text purportedly written by Zoroaster. 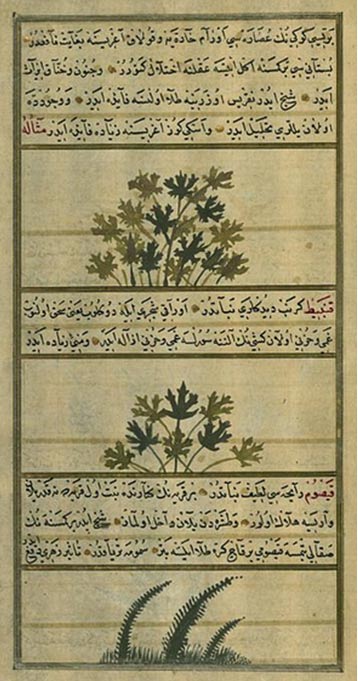 The Scythians brought Cannabis to Europe from the Altai Mountains to Germany around 2,800 years ago. The Greeks make mention of it as a remedy for earache, edema, and inflammation in 200 B.C. 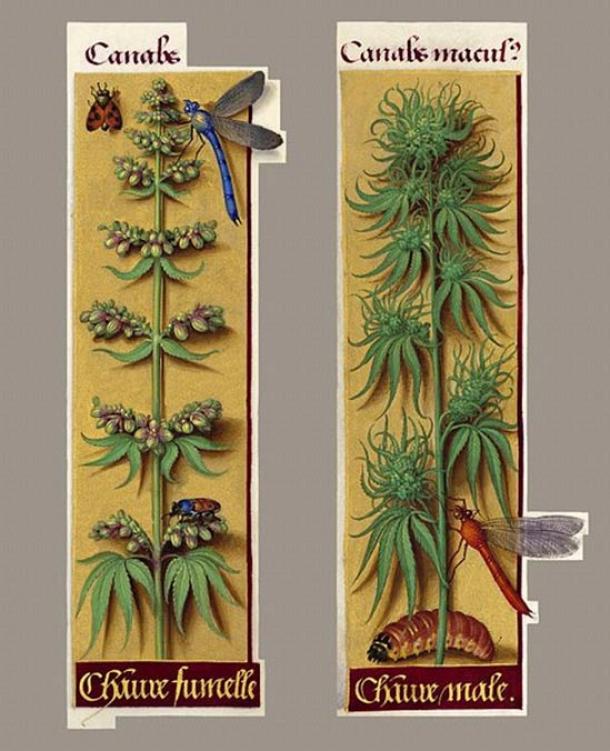 From there marijuana went to Britain during the 5th century Anglo-Saxon invasions. The Spanish brought marijuana to the Americas in the mid-1500s and the English introduced it at Jamestown in 1611, where it became a popular commercial crop alongside tobacco.

In 1799, Napoleon brought marijuana back to France from Egypt where it was investigated for its pain relieving and sedative qualities.

Cannabis sativa, as seen in the Grandes Heures of Anne of Bretagne, (1505-1508). Here we have probably the most ancient botanic depiction of the plant in the western world (male and female). (Wikimedia Commons)

annabis finally reached the United States at the beginning of the 20th century, arriving in the southwest from Mexico, as immigrants fled the country during the Mexican Revolution of 1910-1911.  Beginning in the early 1900’s, a number of state and local laws in the United States began prohibiting the use of marijuana.  A federal law called the Marijuana Tax Act banned its use and sales in 1937.  Prior to 1937 in the United States (and 1928 in the United Kingdom), cannabis had enjoyed a 5,000 year run as a therapeutic plant with no history of illegality.

Today, the U.S. federal government classifies marijuana as a Schedule I control substance, alongside heroin, LSD and ecstasy.  In recent years, support for marijuana has increased on a national level in the U.S. with the legalization of medical marijuana in 32 states.  Some nations, such as the Netherlands have decriminalized marijuana possession in coffee shops.  In 2001, Portugal became the first European country to officially abolish criminal penalties for personal possession of drugs, including marijuana. In the last decade, a plethora of scientific research has emerged providing evidence for the medicinal benefits of consuming cannabis, confirming what ancient people already knew thousands of years ago.

Blaszczak, By. “Marijuana’s History: How One Plant Spread Through the World.” LiveScience. October 17, 2014. Accessed May 16, 2015. http://www.livescience.com/48337-marijuana-history-how-cannabis-travelled-world.html.

This site uses Akismet to reduce spam. Learn how your comment data is processed.